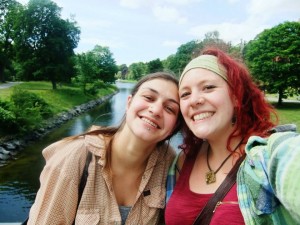 This is the story of all about how, my life got flip-turned upside-down. Or in other words, that time I went to Stockholm, Sweden to visit my good friend Andrea.

After 4 years of attemting this great trek, this June I finally managed it. I was going to Sweden! Not only that but due to wonderful timing and planning, I was going back to Glasgow in the same trip to join Andrea for her graduation. I packed my bag with all the necessities one needs for such a trip; shoes, pants, smart clothes and some books to keep me amused on the journey. I had just come back from Spain from my first stint at Tower Academy so I was well prepared for the journey.

Everything went very smoothly (from what I can remember). There are always hiccoughs whenever I have to go to an airport but these were evidently not bad enough to have stuck in my memory. Upon arriving in Stockholm I was immediately directed straight to the pub where reunions could truly take place. It was wonderful catching up with my comrade in arms once more and we spent my time in Stockholm very plesantly. We made lots of new friends who bought us some very interesting drinks, we walked a LOT and I discovered just how green Stockholm is as a city. I met some of the friends I’ve heard so much about over the years of knowing Drea and they finally got to meet the mysterious George. We wandered through many parks, including one where I found some ducks, on a beach, in a city. All very exciting. We went on a boat trip around some of the northern part of the archipelago and had fancy

dinner on a fancy boat with Drea’s mummy and her partner.

Everything was delightful. The weather might not have been the 20-some degrees and bright sunshine we’d been hoping for but, having just returned from a 40 degree Spain, I was pleased to get some relief from the heat. There was one glorious day of sun and this day just happened to occur on the day where I got to pat a baby reindeer. I feel that this is one of the single most exciting things to happen to me bar passing my degree or getting a puppy. We named our baby reindeer Sven and it was glorious. Along with reindeer, there were many other animals at the ‘zoo’ including baby goats (which were also patted), bears, wolves, sheep and many many chickens and geese. All in all, it seems as through Stockholm is pretty much run by animals and birds. The geese appear to have got on everyone’s last nerve with their incessant pooping all over the

parks and, to my delight, there were ponies everywhere in the suburbs.

Alas my trip to Stockholm had to come to an end but that was not the end to this adventure. We all packed our bags, Drea, her mummy and I and off we trotted to Stockholm’s main airport. This one was significantly more ‘city airport-like’ than the airport to which I had arrived a week previously. The other airport it turns out is much closer to another city and felt like it had been thrown up, with someone’s spare barn as departures. Very inventive.

Anyway, our next destination was Glasgow and it was wonderful. The reason for our visit was Drea’s graduation (finally!) and not only this, but our dear dear Sharky would be joining us for the day. He arrived early that

morning and there was an awful lot of squealing and many many cuddles. Through fits of giggles, Sharky and I watched Drea’s ceremony on a big screen then congregated in the quadrangle for a multitude of photographs. The rest is somewhat of a blur. Many glasses of champagne and wine were consumed, there was a delicious meal at the Brazillian restaurant, multiple games of foosball were played (Drea and I still had a spectacular winning streak going) and the cider flowed freely.

Saying goodbye was very sad for everyone and it has been hard living in different countries from both of my darlings but hopefully, come Easter there shall be a reunion to top all reunions. Bring it on Portugal.