So in my infinite wisdom I have decided to make an attempt at writing down all of my adventures.

I am not an experienced writer and haven’t written anything of his ilk since I was at school and from memory, my writing career totals to not much more than an essay on Shakespeare and a short story about a cave-dwelling spinach monster. Not a promising start. However, there’s always time to learn a new art so here goes. 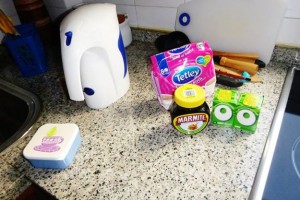 I’ll start with an adventure to Écija. This has been my longest Spanish adventure so far and has involved many cups of tea (or as we’re talking Spain, té). As the title of this new venture is tea-based I feel like this is a good jumping off point. There aren’t many things I miss from Britain food-wise, OXO cubes are a sore loss, and I require a fresh pot of Marmite every few months but the real stickler is tea. Tea in Britain is very different from most other places. We make it strong (mostly) and we add milk (and in some cases sugar). We are particular about our tea. Many mornings I have ruined my mother’s day by accidentally putting the tea from the teapot in the mug before the milk (or vice versa if it’s a teabag). In Écija, and Spain in general tea is different. On one unfortunate occasion, I decided to risk it and ordered myself a cuppa in a café with my breakfast. I was served a teabag in a cup of hot milk. Not good.

Mostly, what people mean when they refer to tea is a fruit tea. Quite delightful in their own right but for me, never really cuts the mustard. Despite this, I was truly delighted to find, that they do sell bog standard tetly and PG tips in Écija. ‘How wonderful!’ I hear you exclaim ‘Your problems are solved.’ Well yes, I can access tea however I still need my fix of tetly’s green&black tea. This delightful discovery of my mother’s comes in a delightfully bright pink packet and is a lovely combination of green and black tea (as the name suggests). On my first excursion to Écija back in April I brought with me 2 packets of this liquid gold. I managed to make this finite treasure last well and even had a few tea bags left in preparation for my return this September.

Come September, I returned once more to the lovely tranquil streets of Écija however this time, I made the mistake of only bringing one packet of said teabags with me. As is obvious to anyone, this wasn’t going to be enough to last me until my return home at Christmas. I needed a plan. This plan of course, as many of my great plans do, came in the form of one of my parents. My wonderful mum to be exact. She shipped me out not only a fresh packet of my tea but also a little tea infuser so I would be able to make the most of any and all loose leaf teas I came across on my travels. Perfect.