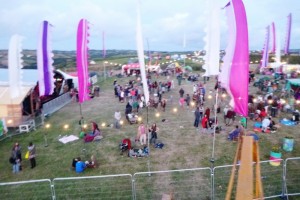 One sunny afternoon in July, a Wednesday I believe, my friend Celia sent me a text asking if I wanted to work at a festival with her that weekend. This was a teeny tiny new festival by the name of Tropical Pressure about to start up in our own dear Cornwall and we were going to get £25 a day and free access to the festival all weekend for the pleasure. Well, even in spite of the late notice, how could I say no? 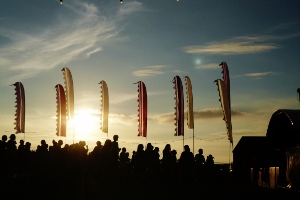 So on Friday morning bright and early, I pottered up to Mabe in my little red KA, grabbed Celia and we headed over to Mt Pleasant. This was not as easy as it sounds. My maps were dodgy and Google’s instructions were less than clear. We went left where we should have gone right, up where we should have gone down and at one stressful point, my car’s engine cut out of it’s own accord (I’m still unsure of what happened here). Eventually though, we found a little (teeny tiny) sign which pointed us in the right direction, and after driving up and down the same bit of road a few times, we finally found the right dirt track and parked the car.

We scoffed some brekkie in the car and swigged my tea and dashed across the car park, thinking ‘Oh god it’s half 8! We’re late!’. We needn’t have worried. Kathy, a wonderful woman was sat looking quite overwhelmed with 100 people asking her about 20,000 different questions. Having never seen a festival being organised for the first time before, I wasn’t sure what to expect but there was a LOT to sort out. We were finally given the job of going to put up our tents, having a little explore of the site and writing a shopping list for our shop. Yes, were were to run our own little shop with a cash box and everything. How exciting! 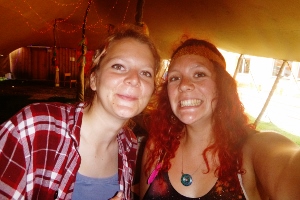 A couple of hours later we returned and were given a wad of cash and told to go on a hunt for supplies for our shop. We got back in my trusty red KA and headed to poundland to gather our stock. Toothbrushes, matches, lighters, bread, loo roll, crisps, sweeties… you name it our shop had it. Except tobacco. But that’s another story.  We set up shop and settled ourselves in for the long haul.

Every day we worked from 10 til 6 and then we were free agents for the evening. Friday night was Latin American music, right up my street so I got to salsa in a field, drinking cider, wearing a headband that I had just made. On that point, I do have to say it was a very very creative weekend with a lot of sewing and sequins. Friday evening we were joined by Matt, Zamian and Gina, and later discovered Ilka and Ieesha prancing around Ilka’s stall (Kitty Gubbins – some weird and wonderful things in that glorious tent). We drank a few ciders, chatted about this and that and had a bit of a boogie. We headed to be somewhere near midnight. Not too late but we’d had an early start and wanted a full night the next night.

Saturday it was Caribbean night. Pete joined our crew for this particular section of the adventure. Dub Colossus and other wonderful acts kept us dancing until late followed by a disco in a barn. Eventually the disco got a little loud so we ventured out to find the fire. We found the firepit, a certain someone found a snail to lick, and we found a story. One man sat at the fire told us a wonderful story of Kelpies and of course I had to have a go myself to try and

top his story. Well, I don’t think my story was anywhere NEAR as good as his fantastic tale but it was funny. And Loud. Celia, who had long gone to bed with Matt, later told me they could hear me all the way from the campsite. Oops. Cape Kernow decided on their first tour, poor Dan (or whatever his name was) stumbled around trying to make some friends and Polish Fire was drunk with too much liberality. Eventually it was time to head back to the tents but instead of going to sleep like good little children there was a good deal of giggling until almost broad daylight. Again, oops.

Sunday was a little difficult after the night before but we started well, played some cards, packed a picnic of tortilla wraps, dairylea spready cheese and marmite and some crisps and pottered off to work. We finished a little early that afternoon as most people had no more need for toothpaste or razors so we went packed up our little stall, counted up our profits for the weekend (not too bad for a shop selling three things in the back corner of a big tent) and sauntered back to our spot in the main field beside Ilka’s stall. We spent most of the evening sitting still chatting and drinking a while lot of tea. 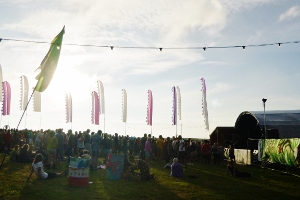 Next year I hope to work this wonderful little festival again. It was delightfully small, only 1,000 people including artists, and had a wonderful vibe. I suggest you get yourself there if you can swing it to enjoy the chilled out vibe and wonderful mix of fabulous music.