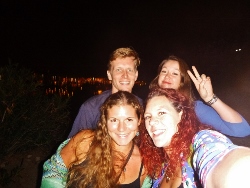 So a few weeks ago, a friend of Kirsty’s (Phil) came to visit. We had previously decided that this would be an excellent opportunity to visit Granada, a city we’d be told many times was very beautiful and well worth the visit. As such, Kirsty, Phil, Lucy and myself squidged ourselves into a teeny fiat panda and headed out of Écija, after of course stopping at the delightful ice cream shop on the way for sustenance. 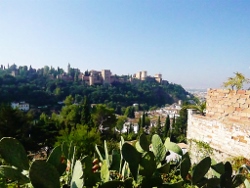 En route we had some fun trying to read maps in the dark car, following teeny wiggly lines of many colours, folding the map every which way possible to stop our destinations being on the fold lines, and generally being excited about our adventure. The scenery was not very interesting unfortunately as Écija sits in the middle of a vast plain, and by the time we got to the mountains surrounding Granada it was dark and we couldn’t see very much at all. What we could see though were the glimmering lights of our final destination. 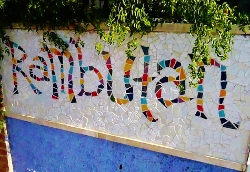 The next problem we encountered was finding a place to park and finding our hostel. This was a fun adventure indeed. Granada is hilly. Not just Falmouth beach hilly but right-up-through-penryn-and-to-mabe hilly. The poor rental car nearly fell to pieces when we tried to park her on one hill (she very nearly rolled backwards!) and when we finally parked and began our trek through the teeny cobbled streets of Granada old town the walk was hard work. Up, down, up, down, up, up up, down. We just could not find our hostel anywhere. After much faffing and deliberation, we finally called them and discovered, we had just been walking up and down the road above them. We had been 20 yards away the whole time. Typical. 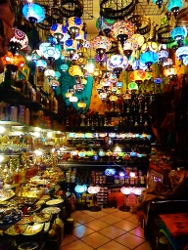 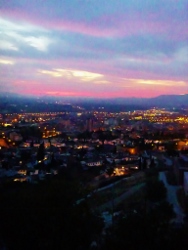 On our first day, we did a lot of exploring of the old streets, wandering up and down the tourist trap of hippy shops, spilling over with multi-coloured lamps and harem pants. We found ourselves a band who we bumped into twice, the second time as we were sat having lunch. A perfect soundtrack for a sunny afternoon. They were a pretty decent bunch so we felt that 15 euros for two of their CDs was very reasonable. We bought them. After we’d done exploring, we bought ourselves some bottles of wine and some crisps and pottered up to the tippety-top of the hill. It was breath-taking. This had to be one of the most beautiful sunsets I’ve seen for a long time. And with friends and wine in Granada. Perfection.

Unfortunately for me the wine had gone to my head somewhat and I managed to bang up my toe pretty well rushing around to get ready to go out later that evening. I can’t be sure but it felt like I’d broken it. Of course we all still piled out the door and headed into town but as I was trying to take it slowly, we stopped off a lot on our way. We ended up in several… interesting bars and clubs and generally had a grand old jolly of it. Unfortunately, the jollity couldn’t last and we had to pay for our fun the next morning. My toe still throbbing and all of our heads feeling somewhat worse for wear, we tumbled out of bed late the next morning, having already missed check out time at the hostel, and went on a hunt for some breakfast. We did make it to the Alhambra though not inside and Kirsty and Lucy did have a little sleep on a wall outside but the views were nice and the sun was hot so we didn’t really mind not going in all that much.

After a delightful if eventful trip we made our slow winding way home down various A roads and through several small towns. Next time, I think we’ll try and pre-book a ticket and actually get in to see the wonder that is the Alhambra and perhaps leave off on that last glass of rum.